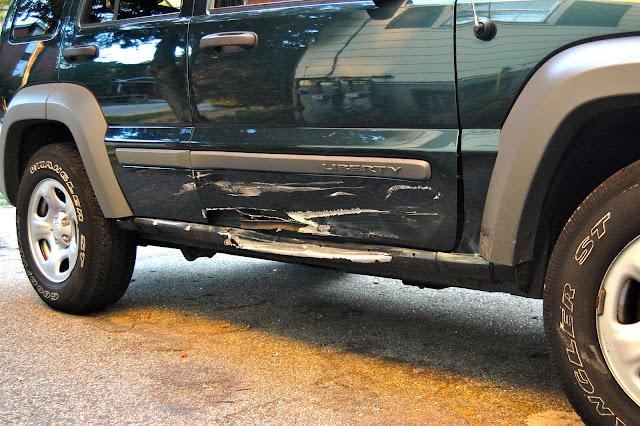 My car got a boo-boo tonight.  It's going to take more than a bandaid and bondo to fix this one.


We were on our way to karate. Manchester has a lot of one way streets with cross streets and I will admit, the stop signs can get tricky. Especially to 80 year old nuns.  I had the right of way, not a stop sign in sight.   The other woman stopped but then kept going, she never saw me coming. I laid on the horn, tried to avoid but it was too late.

In the battle of Jeep vs Saturn, Jeep won.  I was able to drive home, she wasn't.

I have car guts hanging out, I'm missing some pieces.  At first, I didn't think it was going to be more than some door panel replacements but after we got home, I realized the frame is pushed in. It's all one big side piece.  That should be a costly one.

Between my new engine and now new right side, it'll be like having a whole new car, almost...

.....that I had clear view of her not stopping for me which gave me time to prepare

.....that the kids were completely buckled and straps were tight

.....that the Airbags didn't need to deploy

.....that we missed the huge concrete wall along side the art museum that was precariously close to the scene.  We both went flying that way.

.....that the other driver missed the concrete wall too

.....that I just got a carwash so the pictures of my car look shiny

.....that the car that hit us was a low car so she was clearly out of danger as it was her door taking impact. I never usually have Audrey with me for karate and tonight I made a last minute decision to bring her along.

.....for insurance and my knowledge of it


I'm most thankful that these two precious little ones were completely protected and not even phased by what had happened.