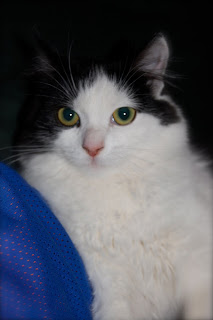 Mazie was found at 1 week old, in a burn pile on a farm. She was almost a goner but they nursed her back to health and she's now 7 months old. We knew she'd been born in August and Nathaniel picked the 13th as her birthday. He's already planning her 1 year party.

Her original name was Coal (remember, the burn pile?). I didn't care for it much. Few days prior to getting her, I started working on Nathaniel to come with a name. We didn't tell him we were actually getting one but said - if you happened to get a black & white cat, and it was a girl, what would you name her? His response for 2 days was "I want a boy cat". We finally got him past that and then past the "Goo Goo Head" type names and finally he came up with a winner.

"Let's name her Mazie. Because she does AMAZING things".

Everyone together now: AWWWWWW!

Then the storm came. We postponed getting the cat since we were displaced from being lack-o-power. Saturday, the kids & I headed out to the country to get the cat while Dan went grocery shopping to replace our fridge contents.

We met the cat. Nathaniel was beaming from ear to ear. Audrey was hiding. We put the cat in the box and Audrey couldn't stop belly laughing. I don't know what exactly she was saying but I have a feeling it was something about how funny it was that there was a cat in the box. We said our thank yous and goodbyes and headed home. The car ride was horrific. Seriously Absolutely Horrific. She escaped from the travel box, screaming cat, screaming 1 year old, I had to keep pulling over to retrieve the cat and then drive with one hand holding the box shut. I was covered with hair - lots of white cat hair. This was the one thing I was worried about when I thought about getting a cat. I didn't want to deal with hair. People reassured me it wouldn't be a lot. They lied.

Anyways, we got home, the cat hid. She smelled. She smelled REALLY bad. I started crying. What did I get myself into. And then there's Dan "I told you not to get a cat".

Audrey spent the day saying "Kitty Where AAAAAARE you". She laid on the floor and stared under the couch at the cat. I brought Nathaniel to the movies to get him out of the house & away from tormenting the poor thing.

Fast forward to tonight. The cat is adorable. The smell was actually Audrey's diaper (probably from the horrifying car ride with the escaping cat). The hair hasn't been SO bad. She spent her first night sleeping with Dan, the same Dan that didn't even want the cat to begin with. Audrey - on her very own - gave the cat a good night kiss tonight. Mazie actually came out and rubbed up again Nathaniel. Things are improving. As soon as the kids went to bed, she came out from under the couch and has been making herself at home. She's purring and playing, seems to be doing just fine. 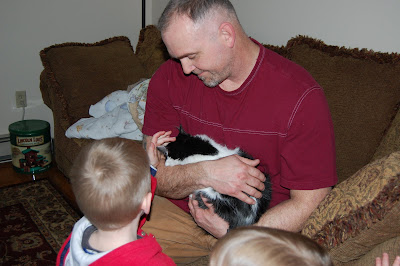 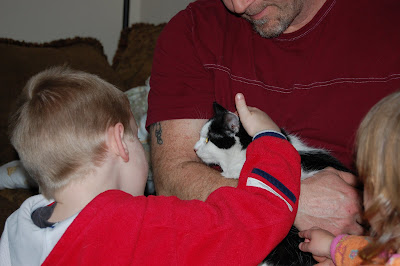 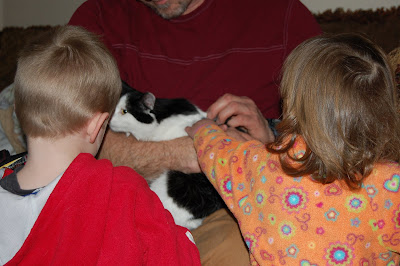 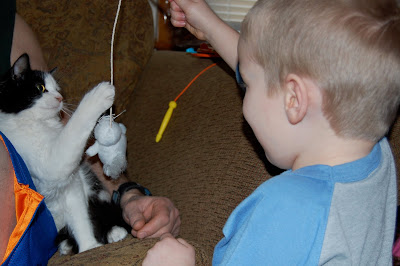 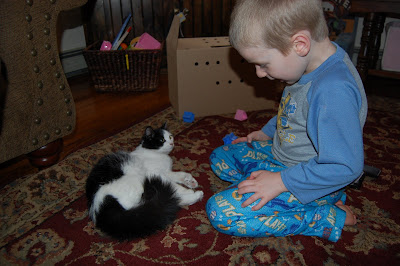 Elsewhere in our day, Audrey had a little too much fun with a marker. 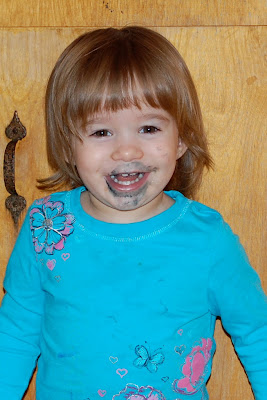 Check out the hand 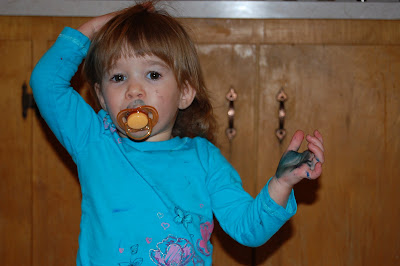 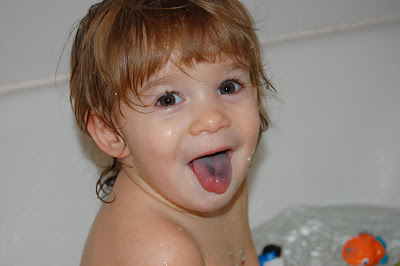 No wonder she was so quiet.
At least the walls were safe.

It's all how you say it.

Nathaniel is smart. He knows exactly how to play us. What he doesn't realize, is that we're smarter.

Sometimes he acts afraid to go upstairs by himself. I know this is his ploy to suck me into playing trains, cars, puzzles, swordfights, school, or whatever random adventure he wants to take me on in his make believe world. He says he's afraid of the fire alarm. He doesn't want to walk by it alone.

This morning, I called his bluff. Our dryer has an amazing feature that steams your clothes. It's great to touch up clothes that have been hanging or maybe didn't get washed and need a refresher before you *ahem* wear them again.. Since I pulled my shirt for today from the pile in the corner on the floor, I put it in to get out a few wrinkles.

While I was getting Audrey ready, I asked Nathaniel to go get my shirt.


Me: NATHANIEL! I have a HUGE job for you to do. Can you go get my shirt out of the dryer?

Me: Please? I really need your help and it's a super special job for you

Me: But it's a super huge job

Me: Yah, I can see why you're too scared. Maybe when you're 5 you'll be brave enough to go in the basement by yourself. It's probably too much for a 4 year old.

N: I AM! See Mommy, I'll go get your shirt all by myself! 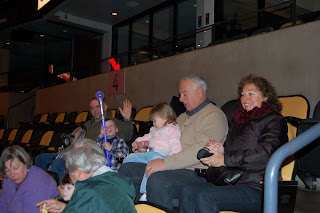 Last Monday we spent the holiday in Boston at Disney on Ice. Kids did great! Audrey sat perfectly still and took it all in.  Nathaniel was amazed with the 1st act, didn't care for the "travel around the world" part of the second half but perked right up a the moment that there was a fire show.


Click here to read more
Posted by CBM CBM at 10:35 PM No comments: 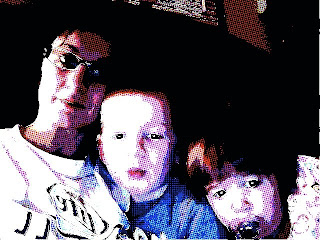 Dan & I made a huge move a few weeks ago.  We converted.  In a big way.  I never thought we would make such a big switch.  I was always against it.  But our eyes were opened. We saw the light.  Our lives will never be the same.

So one Friday afternoon, a few weeks ago, we changed our lives.

We bought MacBooks.
What did you think I was talking about?
Posted by CBM CBM at 6:14 AM 1 comment:

Trying to make it the easiest.

Makes it all worth it. 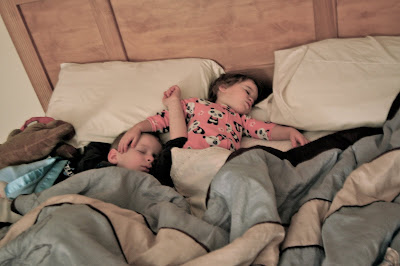 Too smart for his own good

Dan: Why is my knee swelling up again?

Nathaniel: Cause you're old

Dan: Oh really? And what makes me old?

Nathaniel: When you married mommy!
Posted by CBM CBM at 6:01 AM No comments:

Once Upon a time

There was a baby 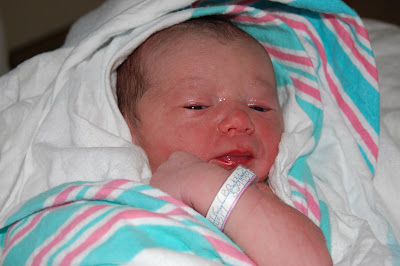 She used to sleep. 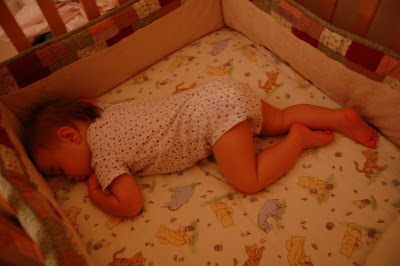 And Now she doesn't

It's a good thing she's cute 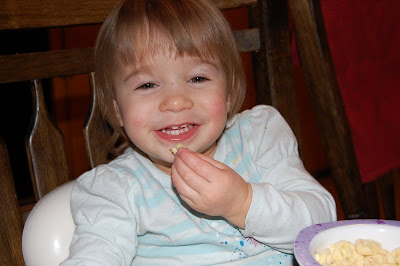 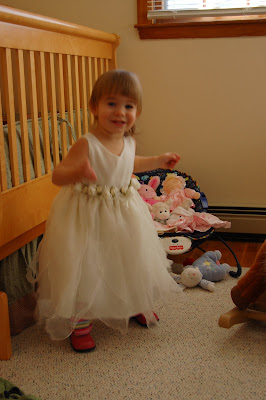 I'm prepared tonight. I've got a blanket, a nice healthy dose of Motrin and some warm water ready to go. I will win. She WILL go back to sleep.